Go to Shapes Now & Save with Code: TUBE25 As one of the first metals used by humans, we value Brass for many reasons. It is malleable while still retaining high strength and wear-resistance. Brass is also electrically and thermally conductive, corrosion-resistant, and antimicrobial. Also, brass is popular for its alluring colors, ranging from darker red and brown to richer yellow and golden hues. Because of its elegant appearance, brass is a common choice for decorative projects.

Fortunately, working with brass is relatively easy. All you need is some basic knowledge and a few simple tools.

Follow these instructions by Instructables Contributor and Online Metals customer Blipvert who discusses tips and tools for working with brass while building a brass gearbox. We also have Product Guides with more specific technical information for these alloys.

Breaking Down the Brass Alloys

First, what is brass an alloy of? Yes, brass is a metal alloy itself! It primarily consists of copper and zinc and can be alloyed further to create the options and use cases we dive into further below:

230 “Red Brass” is significantly stronger than yellow brass and has excellent corrosion resistance. It is used in jewelry, decorative parts, light fixtures, sprinklers, and weather stripping.

260 “Cartridge Brass” as you might guess, gets its name because it is used to make ammunition cartridges. Also, it is the most ductile of the yellow brasses, with good finishing capabilities and corrosion resistance.

270 has good strength, formability, and corrosion resistance. Because of this, it is mostly used in tubing. Typically, it is used in fasteners, heat exchangers, pump cylinders, and tubing for other industrial projects.

272 has good strength, formability, and corrosion resistance. This alloy is mostly used in tubing.

280 “Muntz Brass” is popular for its attractive golden color, spectacular corrosion resistance, and strength. Muntz Brass is similar to bronze but less expensive. Also, it is stronger than other brasses. It is typically used in marine applications. The hull of the famous sailing ship Cutty Sark is plated with this alloy.

314 is a free-machining brass that has superior thermal and electrical conductivity to other alloys of brass, this alloy offers good strength and corrosion resistance as well. It is typically used in hardware, electrical components, fasteners, screws, and other industrial applications.

330 has good strength, formability, and corrosion resistance. Also, this alloy is mostly used in tubing. It is easier to machine and work than other forms of brass. Firemen and Ghostbusters slide down poles overwhelmingly made from 330 brass.

353 “Engravers Brass” is called this because it’s easy to machine, resists corrosion, and polishes to an exceptional sheen. Beyond usage in brass placards and signs, it is often used in nuts, gears, door hardware, and furniture drawer handles

360 “Free Machining Brass” is most commonly used in bars. The presence of lead in the alloy creates a highly machinable material that can easily be cut and shaped into whatever you need, which is where it gets its name. It is not so good, however, at forming operations.

380 “Architectural Bronze” is actually brass, not bronze. It polishes up to a great finish, resists corrosion in non-marine environments well, and it also machines comparably well to 360. It is typically used in architectural applications and ornamental hardware.

385 “Architectural Bronze” is also not bronze. It polishes up to a great finish, resists corrosion in non-marine environments well, and it also machines comparably well to 360. It is typically used in architectural applications and ornamental hardware.

485 “Naval Brass” is very similar to 464 and valued for the same reasons. However, it has better machinability. This alloy is typically used in marine hardware, wear plates, bushings, fasteners, condenser tubes, and, again, cannons.

770 “Nickel Silver” is neither nickel nor silver. Also, it’s often called German Silver for historical reasons. But again, it’s not silver and was not discovered by Germans. This alloy has good strength, a silvery appearance, and excellent resistance to corrosion and tarnish. It is typically used for decorative and ornamental applications.

792 “Nickel Silver” is also not nickel, silver, or discovered by Germans. The difference between the 770 and 792 is that the 770 is almost exclusively used in sheets whereas 792 is often used in round bars. 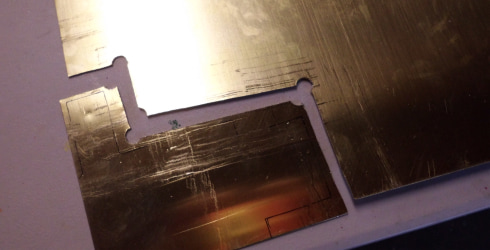 How to Cut Brass

Start by using paper, a cereal box, or spare cardboard to cut out templates for layout. This ensures that all components will be uniform. You can model your design in a CAD/CAM program if desired, especially with a project that is complex and precise.

Now you have two options, you can either glue the templates to the surface then remove them at the end of the work. Or you can secure the template on the brass sheet stock and draw an outline of the template with a fine-tipped marker. Mark the centers by punching holes with a center punch.

Cut along the outline of the brass sheet with aviation snips. If you prefer, a hacksaw, saber saw, jigsaw, or bandsaw will work. Blipvert suggests using a power jigsaw to turn corners in order to preserve the extra brass stock segments. After the shape is cut, deburr and file the edges. How to Drill Brass

A step drill makes the neatest holes, and a chain drill is a good tool for creating larger holes. Also, make sure you use a round file to smooth the holes after you drill them. However, a regular drill is a solid alternative. You can deburr the holes using the deburring tool if you choose. When drilling brass be sure to check the drill manufacturer’s table for the appropriate brass drilling speed. For example, Noresman Drill & Tool recommends 150 – 300 sfm (surface feet per minute).

How to Bend Brass

Sheet metal is traditionally bent with a benchtop or floor sheet metal brake, sheet metal pliers, or a press. Blipvert uses a vise with soft jaws, which he made from HDPE plastic scrap, along with a ball peen hammer for small bends. With these tools, clamp the brass squarely in the vise and gently hammer and mold the sheet until it reaches the desired bend.

If you have tight tolerances, keep in mind that the minimum bend radius tends to be the thickness of the stock. Bending a larger radius, on the other hand, can be done by clamping a solid rod of wood or metal next to the sheet and forming it around the bend. Bends for longer sheets that can’t fit within the vise jaws can be done by clamping two pieces of angle iron around it and lightly using a hammer to work it into the desired bend. Lastly, if accidental bending occurs in a section of the sheet you wish to keep straight, simply hammer the section on a flat surface until it reaches its original form.


How to Weld Brass

Brass can be more difficult than other metals to weld, primarily due to the presence of zinc. However, by following a few simple steps welding brass can be an easy and fun task.

First, you should find out the zinc percentage in the material you are dealing with as it will impact your weld. Since zinc has a lower melting point than copper, overheating the alloy can lead to porosity and cracking.

You should use Oxyacetylene as your shielding gas to protect the material from the atmosphere. Zinc tends to have a poor reaction to the environment and releases toxic and dangerous fumes. Porosity can also be a side effect of ineffective shielding, so make sure you set yourself up for success.

Next, you will need to use flux to promote the fusion of metals better when working with Brass. Mix the flux with water to create a paste and coat the brass surfaces that you are welding with the flux paste. (Use a brazing flux that is specially designed to work with Oxyacetylene gas.)

Keep the acetylene gas on low to create a barrier while increasing the oxygen supply. This ensures there will be enough oxygen to develop a coating on the Brass. This coating prevents any harmful fumes from escaping during your weld.

Lastly, choose a welding tip that’s larger than you would for welding brass to steel. You will need higher heat conductivity for the former procedure 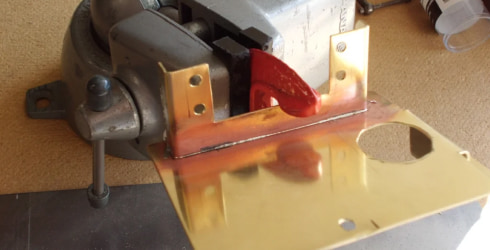 How to Solder Brass

When soldering brass, Blipvert uses a propane torch because this is the easiest way to join brass. Butane torches also work.

Use a silver solder, also called plumbing solder. This material has no cadmium, lead, or other undesirables. It is also harder and stronger than the more common lead solders. Because of this, silver is the ideal solder for working with brass.

Also, apply solder separately to each part for the best results. This is a process known as tinning. Next, make sure you heat the parts, not the solder itself.

Here are key points to consider: The Weldability of Copper 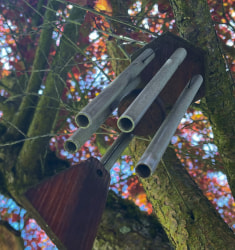 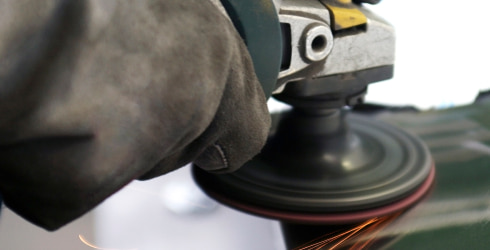 Polishing Metal to a Mirror Finish 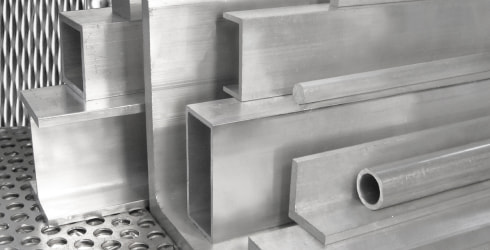 A link to reset your password has been sent to your email address.

Please use it when signing in below